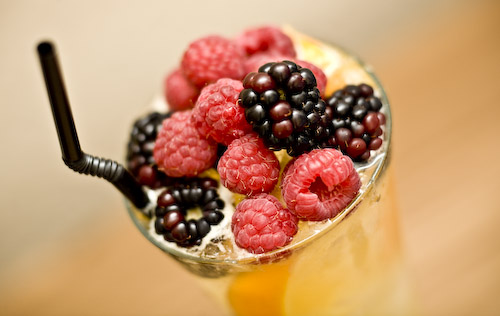 A Cobbler is basically any drink ‘cobbled’ together from spirit, fresh fruit and sugar. Some of the earliest recipes are from Jerry Thomas’s “How to Mix Drinks, or the Bon-Vivant’s Companion”

First published in 1862, when Thomas would have been only 22, it remains one of the true tomes of classical bartending, from a time when the world of straight spirits, beers and wines were facing a real attack from the forces cocktail.

The cobbler rose on the back of one of the most significant inventions in an age of significant inventions, the commercial manufacture of frozen water, or ice. Perfected in 1854 and widespread by the time Thomas wrote his book, Ice would become the backbone of cocktails everywhere, and the Cobbler would receive another fine piece of scientific enablement before the turn of the century with the invention of the paper drinking straw.

The drink itself is delightfully refreshing, and thanks to the addition of a summer’s bounty of forest berries, looks the part too.

While this recipe belongs Jerry Thomas, the photo and my attention owes a deep debt to Oh Gosh!