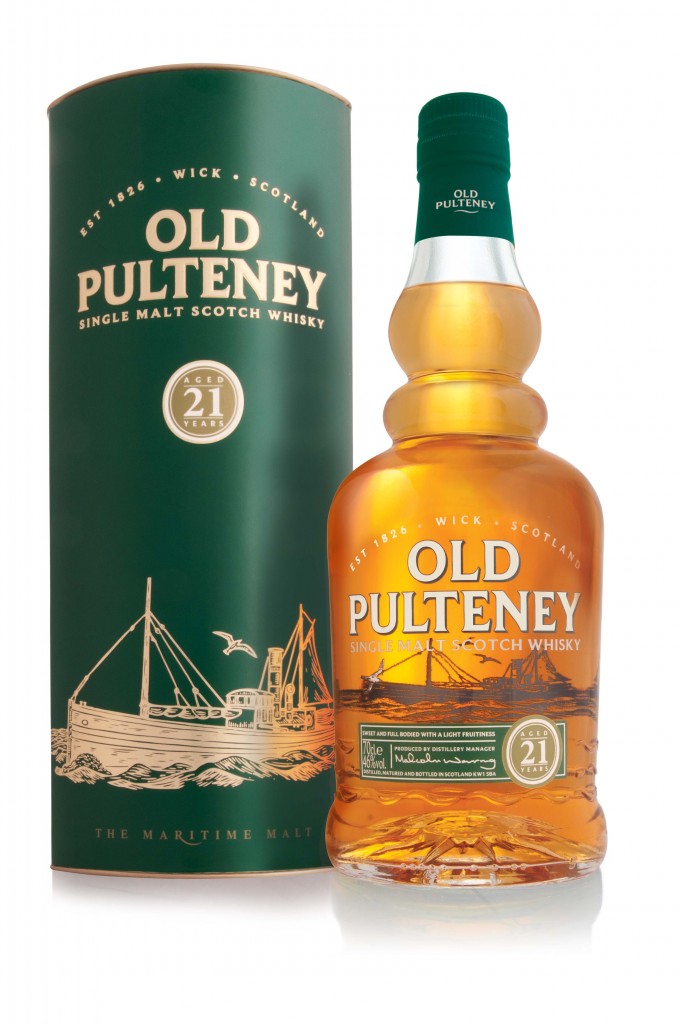 Today was marked by a rare pleasure, the chance to taste a range of whisky from a place called Wick in the far north of Scotland. Called the Maritime Malt, the marque is a big supporter of seaborne adventure and Sydneysiders will see their 70 foot clipper clear the heads and turn right for Hobart this Boxing Day. I’ll admit I hadn’t heard it mentioned much before today.

Jim Murray scored the Old Pulteney 97.5, a score that has never been exceed and only a handful of other crafted whisk(e)y has made the grade. Now, I’m not entirely sure you can fully trust the palate of a single individual, even one as experienced and indeed descriptive as Mr. Murray, but here he makes a fine point.

In your glass you get an oddly darker whisky than the 30yr old from the same distillery. It is an excellent whisky to smell; complexity and fineness of flavour that will have even the most ebullient of whisky describers searching for a thesaurus and flavour map. All the Old Pulteney drams have a enchanting seaside flavour to them, a salty backbone that spice, sugar and malt cling to on a seemingly everlasting slide to a delightfully distant finish in this expression over all the others.

The 21 is rested in a Fino cask, and the dry nuttiness it lends takes this from a fine drop to a truly memorable one for me.

Often described as the most Northerly Distillery in the UK, Old Pulteney actually has lost this distinction with the restoration of distilling at the Wolfburn still in Thurso at the start of 2013. Thurso is only another 20km towards Father Christmas from the stills in Wick, but there’s not much of Scotland left for a leapfrog attempt.

Freed from their unique geographical burden, their still is a unicorn. It has both no head nor swan neck, a legacy from their initial delivery to the site many moons ago. The stills that were delivered to the site were too tall for the stillhouse, and obviously keen to get on with the making of some truly excellent whisky, the executive decision was taken to cut them down to size. The result is called by many a smugglers still, a throwback to the delightful history of whisky, freedom and sticking it to the ruling classes. They also use a 90 meter long set of pipes to cool the spirit, a practice left in the past by most, but you cannot argue with the result of a worm tub finish.

This is the perfect whisky to buy your dad or know-it-all best friends who insists their brand is the pinnacle.

Not cheap at $200 from Nicks, but worth every penny and you’ll get free delivery at that price. For those of you unwilling top trust this special liquid to the hands of Australia Post, you can also find a bottle at the Oak Barrel, World of Whisky, Camperdown Cellers on Parramatta Rd and Liquor on Oxford here in Sydney.