With 42 Below’s Cocktail World Cup just around the corner, I’ve been once again staring open eyed at drinks that show a level of commitment and creativity that frankly astonishes me. I’ve also been watching a lot of the Winter Olympic coverage, in stunning HD on Channel 9 here in Australia, and it was that coverage that led me to the Toronto View website, and this great article on the cocktail scene there.

I’ve got all the ingredients for this either at home or in one of the great Asian supermarkets downstairs from my office, so I’m off home to make one of these tonight. I’ve taken a small liberty in renaming the drink the Hottosawa in katakana, somehow I like it more than the Hot and Sour, which seems a little plain for such an amazing looking drink.

½ oz Choya 23° plum liqueur (this is a umeshu-salt/sour/sweet liquer from Japan), 1 ½ oz Bulleit bourbon (I’m going to use Basil Hayden’s instead), 4 pieces nori seaweed, 4 or 5 drops of sriracha (this is a hot chili & vinegar paste from thailand. If you can’t find it, mash up chili, garlic, salt, sugar & vinegar. I’d start with equal amounts and go by taste), 1 pinch wasabi, 1 egg white, 1 ½ oz citrus (lemon and lime juice), 3 cilantro leaves (that’s Coriander to you and me), ½ oz maple syrup (this drink is from Canada, after all), ½ oz simple syrup. Combine all those over ice and shake hard to make a great foamy consistency for the drink. Stain it into an ice filled rocks glass

The one in the picture is rimmed with a mixture of powdered Miso, lime salt and nori (seaweed). Then further garnished with a sliver of nori, tobiko (flying fish roe) & ikura (salmon roe). You could probably use Masago (capelin roe) without anyone pulling you up. If someone does, take the drink back and pour them an eight ounce glass of  Blue Curacao.

A few of you may have wondered what those little plastic sticks added to a post mixed Gin and Tonic or Vodka Soda were for. They are indeed swizzle sticks, perfect for entwining the silky threads of falernum syrup around the shaved ice as it melds the rum and juice into a truly perfect marriage.

The swizzle is a drink from the Caribbean, a true tiki classic. Most histories point to Barbados as the home and as such Barbadian Rum would probably be a fine choice. I, however, am going to go all Nicaraguan on you and suggest the mystically smooth stylings of Flor de Cana Rum.

Ok, now this is why the recipe is tagged maximum effort. Falernum requires effort and patience. there are a few recipes floating around the web, the most involved of which is at the Cocktail Chronicles.

I’ve tried my hand at this, and I will photograph the process later to explain it all, but in short.

Add the zest of 5 decent sized limes, 1/4 cup of almonds, roasted off in a tray, a tablespoon of cloves, a thumb sized knob of ginger, finely chopped, skin on to 250ml white rum, (I used Bacardi.) Leave it to soak overnight, fine straining, or cheese clothing out the bits in the morning. The result should be pungent and pretty green.

Add this infusion to 500 mls of 2:1 sugar syrup (twice as much sugar as simple syrup) the juice of the limes you zested the night before and a dash of almond extract, if the toasted almonds haven’t come through.

I haven’t tried adding gomme instead of 2:1 syrup, but I think the result might be special.

Part One in a Four Part Series called The Glorious Recipe.

One of the most common elements in modern cocktails is the smoothing and sometimes insipid sweet element. Learning different methods for sweetening cocktails and how to make your own syrup is an essential step to being able to make quality drinks for your guests when you are entertaining. Here are a few to get you started:

The most basic if the sweet family of ingredients. Simply take equal parts white sugar and water and combine. There is much debate over the merits of hold vs. cold, but I have experimented and am yet to find a difference. I generally take 500 gms of sugar and add it to a pot of boiling water, that I have measured out to 500 mls (bless the metric system.) Take the pan off the heat when you add the sugar, and after about ten minutes and a couple of stirs the liquid should be free of sugar crystals. Bottled, it can be kept under refrigeration indefinitely, but you will most likely blow through the 800 odd mls that result from this recipes in two or three nights of irresponsible entertaining.

Demerara and Brown sugars, plus the new low GI cane crystals can be used, with differences in the way the final product will taste.

A note on infusion. Perhaps my single greatest revelation in mixing my own drinks at home was infusing the simple syrup with the flavors of fresh fruits, herbs and spices. Material should be chopped to small, but not obsessive slices or cubes and left to sit for an hour or more. Adding heat will speed the process but can add a stewed or caramelized note to the flavor that is not always welcome in your finished beverage. Personal favorites of mine are Lemon/Lime, made with peel and juice of each fruit; Ginger, with the skin left on to save both time and sanity; Lemongrass, with the stalks chopped and roughly smashed; Fresh Apple, I have found Fuji’s work particularly well; & Fresh Fig, which is surley one of the foods of the gods. (or god, depending on your stance.) The key here is experimentation, and remembering to remove the organic material with a sieve.

While most modern recipes consider gomme and  syrup the same thing, they are in fact somewhat different. Gomme is made by combing a paste made from equal parts Gum Arabic and water with a 2:1 (less sweet) version of the simple syrup above. Gum Arabic comes from unhealthy trees in the Sudan, it was used in the past to adhere ink to newsprint and is one of the constitute ingredients of jelly babies. It can be found at specialty food stores.

The principle reason for adding Gum Arabic was to stop the sugar in the syrup from crystalizing with the lack of cold storage. It did have a side effect of adding a silkiness to a mixed drink, something now achieved by the addition of raw egg, making gomme the vegan alternative I suppose. Probably only made for notoriety rather than necessity.

Equal parts so hot right now and reviled because of the uneconomic nature of having said syrup slowly crystallizing on the rack, Agave Syrup is a low GI alternative to using Simple Syrup. The product is made from the Agave Plant, or more specifically, it’s core, ‘sweet cactus juice’ would probably be quite an accurate description of its provenance. Agave Syrup does carry a little hint of the sawdusty note found in Tequila, but a Tommy’s Margarita, which is made with this stuff, is possibly the nicest, smoothest, most incredible drinkable elixir I have ever laid my lips on.

Basically the reason America is fat, corn syrup is great at making things sweet, and ridiculously cheap to produce. It can be found flavouring everything from your Coke to your Cheetos. It should never sweeten your drink.

Essentially the cane sugar syrup that is used to make Agricole rum. Can be used to great effect, especially if you can buy a bottle of both the Rhum and the syrup it came from. Tikilicious!

Are acceptable, but are generally not used in bars due to the pesky nature of the complex chemicals and the way the streak up glassware, even when its put through a high temperature cycle.

Are basically syrups with some booze added.

Stashed away out the back of Lotus‘ restaurant on Challis Ave in Potts Point, this micro bar punches well above its size. Part of Sydney’s flash as Merivale Group, while the clientele is often fruitier than the cocktails, Lotus manages class without the pretension of the shinier, larger and altogether more wanky Ivy. But I digress.

There are two seats up close to the bar, if I am not sitting in them, pull up a pew, talk, drink and enjoy some of the highest quality hosting in the City. The bar manager, Peter*, is genuine czech class, mixing up ultra tasty libations for an adoring bar.

Bohemia was a champagne cocktail of excellence; le mercier absinthe, shaken with a hint of fresh lemon and sugar, topped with domaine chandon and caramelised star anise.

I followed these up with a cocktail from the front section. I can’t recall it’s name but it was Tain something, cherries muddled with Glenmorangie. Stunning, deep, velvety, delicious. I’ll be back to find out the name later in the week.

Over the weekend I entertained some friends with French 75’s, some slow cooked Italian and a tortuous game of scrabble.

The French 75 is named for the small but powerful artillery piece the French were so enamored with firing at the Germans.

Recipies vary, but all contain Gin, lemon juice and sugar, topped with Champange. My personal favourite incorporates absinthe, just a few drops in the bottom of the flute, before the rest of proceedings are kicked off.

Mix 3 parts* Gin, I used Beefeater, to 1 part lemon** juice over ice with a small measure of sugar or gomme***, shake briskly over ice and fill flutes about a 1/3 full with this mixture. top with Champagne and garnish with a large twist of lemon peel.

* say 120mls for four cocktails, ** say 30mls, or almost the juice of an entire lemon (depending on how large the lemon is, of course), you might want to add a touch more sugar if you’re using bone dry Aussie bubbles instead of the French stuff. 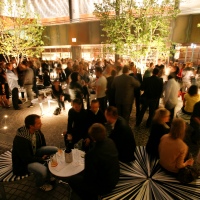 The money spent on fitting out this grand structure is supremely visible. The quality of the finishes from the front bar, the bathrooms downstairs and the outdoor courtyard are stunning. I hear good things about the restaurant, and the food did look stunning. The menu is available on the website.

Happily the quality is matched behind the bar, with a fine selection of hard to find spirits and bar tending nouse ensuring that any libation that crosses the bar is tasty, balanced and well presented.

Blake Head, another fine kiwi export, whipped me up a great little drink to unwind a busy day at the office, the South Gin Southside. The Beresford has a vodka southside on the list, but my preference is for the extra lift that gin imbues. South Gin is made in New Zealand, by the same guys that make 42 Below. It is a very soft gin, meaning the hefty kick of juniper prominent in most English gin is softened considerably. The liqour is distilled with a couple of native botanicals, namely kawakawa and manuka.

The southside is essentially a gin sour. 3 parts gin, 1 part gomme (sugar syrup), 1 part fresh lime juice. About six to eight leaves of mint are added before the mixture is shaken, strained and served up. garnished with a mint sprig.

The taste is both sharp and cool, the mint hangs on your breath and the drink will also stand up to being made with something a little heftier, say a Beefeater perhaps. Probably not one to stay on all night, but a great way to freshen the senses before a meal, snack or another beverage.