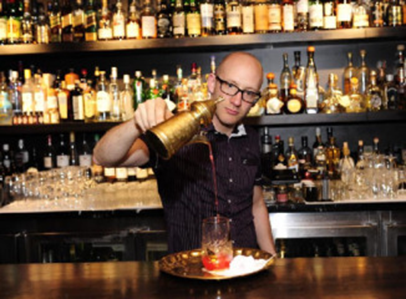 Eau de Vie has been my favourite slice of Sydney’s drinking scene for more than a few months now and they still manage to surprise, impress and intoxicate me. So it was, with a bright smile and a deep sense of anticipation that I headed down the Darlinghurst Road once more and in to Eau de Vie for a appreciation of Single Malt Whisky, led by the charismatic frontman and booze afficiando, Barry Chalmers.

I’ll write about the six malts we sampled next, but I just wanted to share some of the finer points my diminutive Glaswegian orator shared in his thirty minute epistle on the finer points of supporting his homelands economic well being.

We started with a history of spirit. From our man in the middle east, the moorish expansion, the information superhighway that monastic tradition bestowed. Eventually the Exchequer Rolls, and a record of about 1500 bottles of aqua vitae or water of life, and conversely eau de vie, natch. 1500 is a reasonable run, so it had most likely started some time before that.

Barry has a superb and well spoken grasp of the role of whisky in overcoming the tyrannies of distance and harsh terrain. It’s role in building a transportable economy in Scotland. A short revision of history, covering the Act of Union, the facts running somewhat different to everyone’s favourite anti-Semitic Australian’s blue faced cinematic, shall we say, revision. Taxation, evasion and eventual systematic establishment and the distilleries as we know them today.

Production next, with grain, through three steps of the malting and mashing process on show. A quick beer distillation in a tiny onion top copper still, cooled through a worm tub sets up a quick but quite thorough discussion on the different types of still, the effect of shape, height and ornamentation has on finish and final product.

Finishing next, a freshly toasted stave handed round, scents of vanilla rampant. We all got lost in forests and finishing effects from charred out woods that had hosted American, French or Spanish. It was agreed by all that green wood that hasn’t had it’s share won’t work.

Appreciation then. A light sniff, as nose in glass will knock your blinking socks off. Try over the back, over the glass and just in front. I do remember it smelling different things, but I’m unsure if there’s method to the madness. A sip, coupled with a lovely quote delivered in an accent broad. “You have to figure out if the whisky is a winding path through the forests of your mouth or a great fooking dual carriageway.” Attributed to Dave Broom, but Barry will always own it in my eyes.

Through the six, with stories and myth around each. A great education and a fine way to spend an evening, finished with a slice of cheese and a final Penicillin at the bar.

If you’re keen to be involved in this type of nonsense, the best way to keep up to date and aware is to become a member of the Eau de Vie Facebook page as they’re pretty good at making sure the events are on there.  They’ve got 574 fans now, so make me look good and join in your thousands…

There is also a winter drinks session, being led by Dr. Phil next wednesday, so come along and join in.