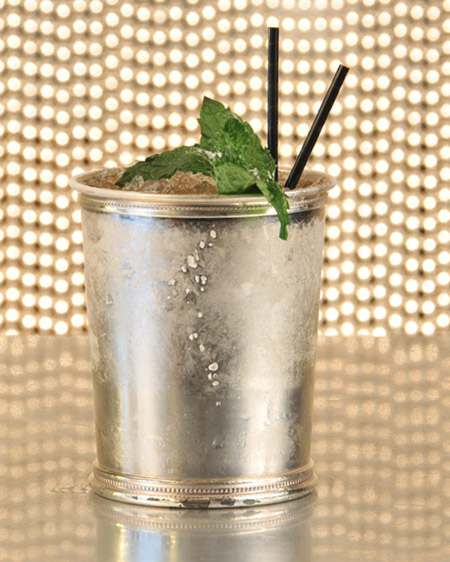 Each year before Tales of the Cocktail, there is a contest to find the cocktail of the conference. This year the theme was Juleps and this is the little silver cup of perfection that took the prize. Why a Julep? David Wondrich summed it up pretty nicely on the tales site.

“The Mint Julep was the drink that put American mixology on the map, the thing that foreigners pointed to when they wanted to say something nice about the rough-and-tumble new nation on the western shore of the Atlantic. And originally, like most American inventions, it allowed for plenty of individuality and improvisation. With this contest, the Julep is back,”

But, I digress, Here is the recipe, created by Maksym Pazuniak, Rambla/Cure

They haven’t put a method up on the site, probably because everyone at Tales could make this drink in their sleep. For the benefit of those that couldn’t I’ll go out on a limb, probably get things wrong and put down on the page how I would make this little tasty beverage.

In a silver julep cup, like the one pictured above, add the sugar cube, both the bitters, the mint and the Captain Morgan 100 Rum. Stir until the sugar starts to dissolve, but gently enough that you don’t bruise the mint and render the drink bitter. Next, I’d add the Creole Shrubb and some crushed ice. stir some more, a minute or so should do. Now I would add the Cruzan, and enough crushed ice to fill the drink to about half an inch below the rim of the julep cup. Stir until the flavours are well mixed. Top the cup with ice, not so much as to look like a sideshow ice shaving but enough that the drink is solid. Slap a piece of mint over the top, releasing the oils over the drink for an extra burst of flavour, add two straws and a garnish of mint from the top of the bush (so it looks nice.) Sip it down. Repeat.

This sounds like a labour intensive drink, and it is. But oh, so worth it.

For those of you that are wondering what Creole Shrubb is, and if you can’t find any where you are:

Take a bottle of Rhum Agricole (Rum made from sugar cane juice, as opposed to Blackstrap.) Add a handful of Creole spices (paprika, chilli, file, dried thyme & basil, cayenne pepper, garlic and onion powder) Also add the peel of ten oranges, preferably dried in the Caribbean sun. It should taste, orangey, sweet and maybe even a little coppery or metallic.