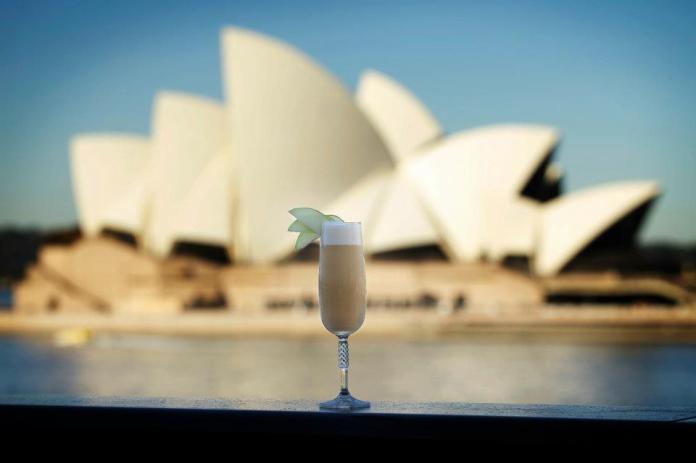 Great example of how to style a shot of a great looking drink from the Team at Club Suntory at Cruise bar on the 8th of May.

There are some other great shots of the day on their facebook page here, but for my money, the photo above is the best I’ve seen out of Australia this year.

Here’s the recipe if you’d like to really drink the photo in.

Here’s the whole lowdown on what was going on:

Stylish Italian drinks icon Disaronno is proud to announce Joel Hodge, bartender at The Goldfish Hunter Valley, is Australia’s Disaronno Mixing Star!  Each year, from Milan to Moscow and New York to LA, Disaronno scours the globe in the search for the world’s finest cocktail bartenders as part of their Disaronno Mixing Star competition.

Australia accepted the challenge in 2012 for the second time, as Disaronno) put the word out to all aspiring bar stars around the country.

Scores of brilliant concoctions were tasted and judged, culling the impressive field of over 170 entries down to just 15 finalists – including some of the nation’s finest bartending talent. In true star style, the chosen competitors were flown to Sydney, chauffeured in limousines and indulged with VIP treatment. Last Tuesday May 8th, saw the challengers assemble on Sydney’s spectacular Circular Quay at the renowned Cruise Bar, the top floor of which was kitted out as a full production set.

After complete make-up styling for the cameras, each finalist was tasked with producing both a single serving of the classic Disaronno Sour, as well as four identical servings of their original Disaronno cocktail. On hand with the pleasant but taxing task of deciding on a winner was the judging panel: from Milan, Disaronno Commercial Director Nicola Bini, Sun Herald Journalist Amy Cooper and Club Suntory’s Nigel Weisbaum. Each of the 15 finalists and their drinks were assessed on presentation, technique – and of course taste – before the judges got to deliberating on their final verdict.

This competition has always discovered new talent, so for some of the finalist this was their first national cocktail competition, whilst the standard of the more experienced bartenders was extremely high. All the entries were a testament to the creativity of Australian bartenders. Continuing with their VIP treatment, the finalists were treated to a luxury Italian dinner in the private dining room of two hat Woollahra restaurant; LaScala.
Nicola Bini commented “never before have we had such a difficult time in deciding was the winner of a national comp, the quality this year was exceptional”

The winner of the competition has an infectious story of his own. Joel Hodge from The Goldfish Hunter Valley had never even been to Sydney, let alone competed in a national cocktail comp. Now Joel will be off to Berlin to compete in the Global final in Berlin in July, and the possibility of appearing in a Bollywood production in India if he takes out the Global final! I’m sure you’d agree both destinations are a far cry from The Hunter Valley!!

As expected Joel was very emotional with his win, dedicating the drink to his Great Grandmother who was an avid Disaronno fan for many years. Joel also presented his drink in crystal glassware that belonged to his late Great Grandmother.

2nd place was awarded to Joe Singara from Luxe Bar, Perth and 3rd place was Anita Strother from Malt Bar in Brisbane.

One thought on “Shot Bro.”