One of my perennial favourite things to do in Melbourne is a visit to the dumpling filled streets (just for the record, there are no dumplings in the streets, this is a figure of speech) of Chinatown. It might be the time I spent in Shanghai, It might be the opportunity to order food in Mandarin, it might be my undying love for Hui Guo Rou, I always find time to visit.

Some time ago I twisted and turned down Croft Alley to the Institute, probably my first ever small bar visit in the fabled Australian 03. I was excited to hear that a new addition to the scene could be found down another of the dead ends on that block, up a set of stairs and behind a locked door. On paper, Berlin is my kind of place. 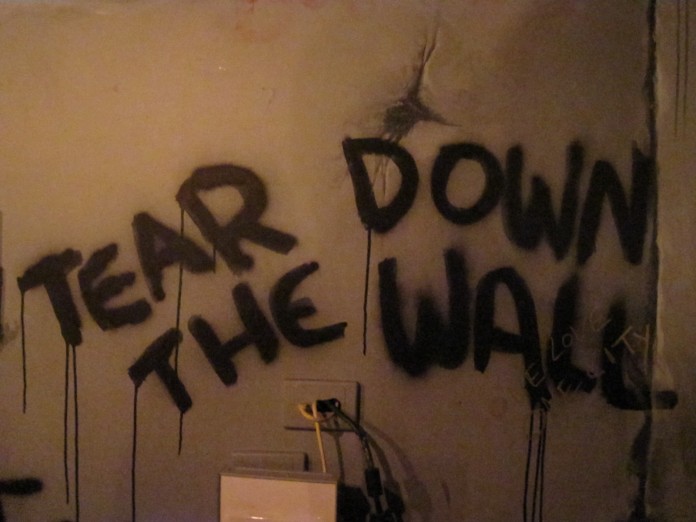 On admission to the bar (small groups are preferred by the management, so visit in 3’s and 4’s). Like Berlin after the war, this venue has a split personality. You enter through the West, opulent carpets and the ubiquitous Kennedy phrase “Ich bin ein Berliner” in cursive red neon on the wall. A black bar and sexy lighting complete the look.

Beside the bar the portal to the East beckons, A razor wire topped storeroom, steel bunk beds and bathtub tables and a small set of four man tables hunker together. Whisper quietly your dissent against the oppressor….

The cocktail list follows the theme, gastro concoctions for the West, simpler fare on the East. I chose the Rum Flip. The drink itself was great, the addition of garlic certainly different, but I’d order it again. Frothy, silky, delicious.

Unfortunately that’s pretty much where the wheels fell off. My two companions ordered from the classics section and both drinks were very disappointing. The 20th Century Cocktail in particular was  so far from the archetype it was very nearly sent back. If I’d ordered it it would have been. The Cacao should be hidden behind the Lillet, Gin and citrus, peeking out and taking the odd potshot after the main event. It should definitely not be wiping it out everything that stands in ts way like a Russian tank division charging through the Black Forest.

You shouldn’t need to list the classics, but if you do, every one that’s on the list needs to be flawless. Especially when you charge $20 a glass.

Like its namesake, I couldn’t help but observe that a stylish facade had vanquished a Utopian paradisaical ideal.